Learn how to care for your kitchenware

Current trends in the food and restaurant industry

Information and updates on all of our kitchenware items

Recipes, tips, and tricks to perfect your cooking skills

By: Team Made In

Seasoning is the process of treating the surface of your pan with a stick-resistant coating formed from polymerized oil which fills the small pores of the pan’s surface. Seasoning also helps prevent rust, particularly in humid areas, or if your pan goes unused for some time.

To achieve a good polymerized layer of oil and, thus, an effective seasoning, a thin layer of high-smoke-point oil or wax should be applied to the surface of the pan and then heated. [Pro-tip: check out our

Made In Seasoning Wax

to simplify the seasoning process.]

The temperature at which your pan should be heated will vary depending on the oil or wax used. When seasoning using an oven, ensure your oven temperature is at or slightly above the smoke point of your oil. As the pan is heated, the surface color will begin to darken. While the coloring may be uneven at first, over time and with regular use the color will even out (the coloring is also known as the patina).

There are several ways to season a carbon steel pan. The best way to season is the method you feel most comfortable with. Seasoning methods range from relatively quick and simple to hours long. Some of the most common methods are below. *Always clean your pan before the first seasoning, using warm soapy water and a sponge. Ensure it is fully dried before beginning your seasoning process.* 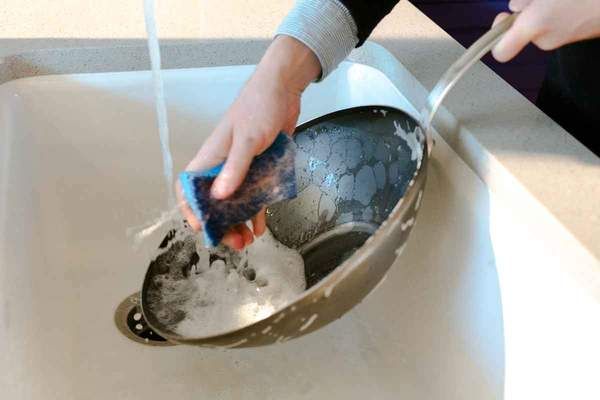 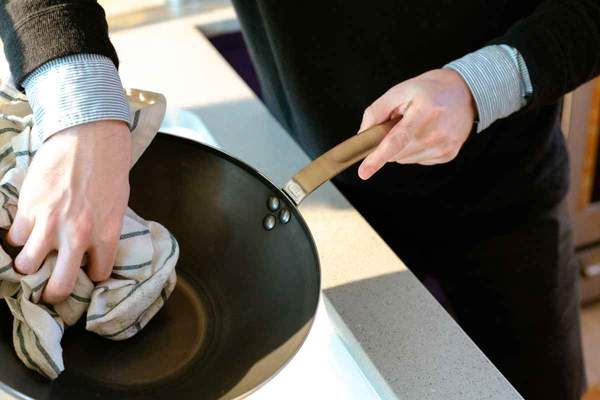 Heat your carbon steel pan over medium-low heat for 2-3 minutes. You can do this on your stovetop or on your grill. This ensures the pan is heated thoroughly and helps open up the pores. It also helps dry the pan completely after washing. The surface color may already begin to change-this is normal and expected.

After heated thoroughly, use a paper or hand towel to apply a thin layer of

or oil to the entire surface of the pan. Fold over the towel or grab a new one, and wipe away as much of the wax or oil as you can to ensure a thin layer is all that remains.

Let the pan sit on the burner or grill over medium-low heat, rotating the carbon steel as needed to ensure it is heated evenly up the sides as well. The color will continue to change and you may see shades of blue, brown, black, or even orange. These are all normal. After about 5 minutes, you can remove your pan from the heat and let it thoroughly cool. It’s ready for use, or another round of seasoning if you’d like!

The pan will continue to season with each use, and only gets better over time. If you won’t be using your pan for more than a week or two, we recommend applying a thin layer of oil or wax to help protect the pan from moisture, which can cause oxidation (rust) on the surface. See the common questions at the bottom of this article if rust does appear.

Check out this video to see the process from start to finish:

Heat your carbon steel pan over medium-low heat for 5-10 minutes.

After thoroughly heated, add 1.5-2 tablespoons of

Using a spoon, carefully spoon the liquified wax or oil around the pan, ensuring it is distributed up the sides evenly. It will smoke. A lot. Use a range vent or ensure your kitchen is well ventilated.

Continue spooning the oil up the sides of the pan for five minutes.

Turn off the burner. You can make a small bowl out of foil by forming it around the base of a cup, bowl, or bottle. Then pour your wax/oil into the foil bowl, allow it to cool fully, and then throw the entire foil bowl in the trash can for easy cleanup. Once you have dumped the wax/oil, use a hand or paper towel to wipe any excess out of the pan so only a thin layer remains.

Your pan is now ready to be used, or you can repeat these steps as many times as you’d like to continue building that seasoning.

Place a foil-lined baking sheet on the bottom rack of your oven, then preheat your oven to 450-500 F. The oven temperature should be at or slightly above the smoke point of your oil or wax, and most high-smoke-point oils and waxes fall in the 450-500 F smoke-point range.

Once your oven is preheated, place your dry and empty pan over medium-low heat for 2-3 minutes to zap any remaining moisture and open up your pan's pores.

or oil to the inside of the pan, ensuring it is completely coated.

Move your hot, waxed/oiled pan to the oven and place it upside down on the center rack. The foil-lined baking sheet will catch any drips (though the layer of oil should be thin enough that there are no or very few drips) 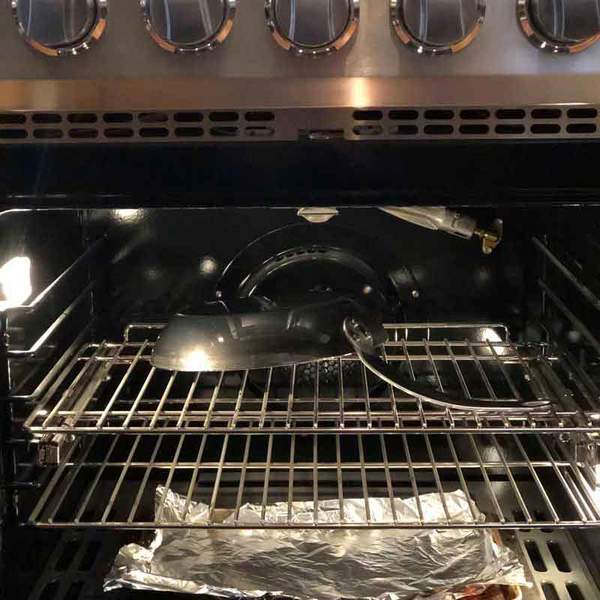 Leave the pan in the oven for an hour. You may see some smoke — that’s okay!

After one hour, turn your oven off and leave the pan in the oven until it’s completely cooled.

Your pan is now ready to be used, or you can repeat these steps as many times as you’d like to continue building that seasoning.

Seasoning with Aromatics (great for Woks!)

Place your carbon steel over medium-low heat. Let it sit for a few moments to release any moisture. Add 2 tablespoons of a higher smoke point oil (sesame, sunflower, grapeseed, etc) or melted

and some aromatics, like garlic cloves, dry green onions (2” lengths), and slivers or slices of unpeeled ginger.

Move the aromatics around the pan with a spoon or spatula. Press them up against the walls of your pan to ensure the oil is evenly distributed.

Continue this process for 15-20 minutes.

Remove from the heat and allow to cool before tossing out your aromatics. Wash the pan with warm water and a sponge. You can gently scrub away any cooked on food residue, but don’t scrub at any discoloration as this is the foundation of your seasoning and the start of the patina.

Your pan is now ready to be used, or you can repeat these steps as many times as you’d like!

Q: How do I know the smoke point of my oil?

A: Some oils will have the smoke point listed on the bottle. If yours doesn’t, some of the more common oils are listed below, along with their estimated smoke point. Please note that smoke points can vary depending on the extraction method, source, etc, so these temperatures are estimates.

Q: I followed the seasoning instructions but my pan isn’t smooth. It’s tacky/sticky. What did I do wrong?

A: Most likely one of two things happened here. Either too much oil was used or the oil used had a higher smoke point than your oven temperature. Too much oil causes a buildup and makes it difficult for the oil to polymerize. To avoid this issue, ensure only a thin layer of oil is used. After applying, you can take a paper towel and wipe the surface to remove any excess. If the oil used has a higher smoke point, you’ll need to adjust the oven temperature when seasoning to 15-20º higher than the smoke point. If you’d like to start over and remove your seasoning, you can use steel wool, chainmail, or even sandpaper to scrape away as much of the sticky residue as possible. You may see some of the "bare" metal when you do this, which is totally normal. The dark color the surface of the pan has when you receive it isn't a coating, despite how it appears. It is actually just oxidation of the metal, which occurs when the pan goes through an annealing process (it's heated in a special oven to 400ºC that has steam injected, causing the surface to oxidize which helps protect from rust in transit). Then reseason your carbon steel (https://madeincookware.com/blogs/beyond-the-burner/how-to-reseason-a-carbon-steel-pan) with the proper amount of oil/temperature.

Q: There is rust on my pan! Is it ruined?

A: Nope! Rust will naturally occur if the pan isn’t fully dried after washing and/or if the pan isn’t stored with a thin layer of oil on the surface to keep it from drying out. A bit of steel wool will scrub it away without any issues, and then you can apply a bit of oil to ensure the pan doesn’t dry out.

Q: The surface of my carbon steel pan started peeling after I cooked with it. I can see bare metal! What is coming off and how do I fix it?

A: Despite how it appears, there isn’t a coating on the carbon steel pan. It is actually just oxidation of the metal, which occurs when the pan goes through an annealing process (it's heated in a special oven to 400ºC that has steam injected, causing the surface to oxidize which helps protect from rust in transit). What you see peeling is most likely either some food residue or cooked on oil. You can apply another layer of seasoning, or simply continue cooking with it as each time it’s cooked in more seasoning will build on the pan.

Easy! You have to be careful when cleaning your carbon steel pan. Water and soap will strip the pan of it's seasoning and its nonstick properties. For that reason, when you finish cooking with your pan, you should gently wipe the pan clean with a paper towel or dish towel. Have some trouble spots? Head to our